There is no such thing as an easy 14er.

If you live in Colorado, climbing a 14er seems like a rite of passage that everyone has experienced. Sure, the fit guys and girls that also run marathons and kayaked down the Colorado River have checked off that particular activity, but it’s not just them. The elderly gentlemen sitting down the bar from you? Yep, he just climbed one last weekend. The hyper child running around in WalMart? Yep, she skipped up one the other day. Even the dogs have climbed a 14er.

At least, that’s what it seemed like to me.

So the idea of bagging (summiting) a 14er (a mountain higher than 14,000 feet above sea level) has been looming in my mind for YEARS now. My sister and I attempted to climb Quandary Peak about five years ago and had to turn back before reaching the summit due to inclement weather (i.e., the clouds were rolling in and Ellie, being the rational one, made us turn around before I could get struck by lightening). I hadn’t attempted one since then.

Oh, there were plenty of excuses. I don’t have anyone to go with me. Lame excuse, but I pleaded the safety card when I was debating in my head. I’m not acclimated to living in the mountains. I used this one for a while; it lost some of its validity when I heard folks from Kansas talking about their 14er experience. It’s too hard and I haven’t been hiking enough. Fair enough, but it was never going to get easier if I didn’t get out and try it again. I don’t really want to get up that early.

I think it was this last one that made me realize what a procrastinating wuss I was being.

Knowing my own foibles all too well, I enlisted the help of a few friends to hold me accountable. I realized that if I committed to other people and we set the date, then I had to follow through. Also, I tend not to whine too much if I have friends around. Whining around family is fair game.

We set off at 5:30 a.m. towards Summit County and Quandary Peak. Yep, I was returning to the very peak that had previously escaped my grasp. I thought it was appropriately symbolic. And I knew where the trail head was, so there was less chance of getting lost. Symbolic AND practical.

At approximately 7 a.m., we set off: three girls and a dog, who would end up running enough to summit three times in the hours that it took us to reach the top.

I’ll spare you the minute-by-minute account of the hike, but suffice it to say that it was a gorgeous, bluebird day–the perfect day for a hike. I wasn’t setting any land speed records, but at a slow and steady pace we ate up the miles and elevation gain to reach the last flat-ish area before the push to the summit.

Then it got more difficult. I had a slight headache at about 12,000 feet, but I took an Advil (thank you, my well-prepared friend) and it dissipated. Unfortunately, it couldn’t make my legs go any faster or make me feel like I was drawing a full breath. But, over snowfields and scree fields and wonky boulders I crept on…and finally peeked over the last bit of snow and saw the summit stick.

It was a great feeling. Which I appreciated as soon as I was able to stop huffing and puffing.

The summit was quite the party scene with maybe 20 people hanging out up top, no less than five dogs wandering around and at least one can of Colorado Native beer consumed (I was a bit jealous of that, but not jealous enough that I wanted to hike it up there). My friend Kay added to the party by busting out the costumes she had brought for summit pictures, including a Mardi Gras mask, a flower headband and a Cleopatra headdress. Though other hikers were jealous, we were nice enough to lend the costumes out for their pictures as well.

The views, as you’d imagine, were magnificent. That whole “top of the world” thing? Absolutely true.

After several pictures to commemorate (and prove) our summit, we headed back down. In some areas, it felt as it were actually harder than hiking up due to the unstable rocks and slippery scree. Of course, sitting down on the snow and sliding was an enjoyable alternative as the sun dries out a wet backside pretty quickly.

After about seven hours of hiking, we packed back into the car with a pretty big sense of accomplishment–and, for me, an uncontrollable desire to summit another 14er.

Next time, I’ll have the celebratory beer waiting in a cooler in the car.

Quandary Peak by the Numbers:

Kay, Caramie and me at the trailhead.

The spine to the summit.

We made it! Smokey seems less than impressed.

No summit is complete without festive costumes. 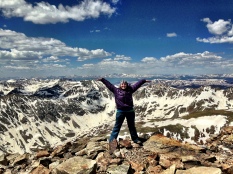 The furrows are from many sliding hikers.

The small white speck to the right of Caramie is a mountain goat.