Vinh Long isn’t a major stop for tourists–during our three nights there, we saw only a handful of Westerners that weren’t on a package trip from Saigon. It is a good place for tours of the Mekong as you’re close to Cai Be floating market; tours from Saigon require a three hour bus ride to get to the same place. Plus, it’s a great way to get accustomed to a new country and communicating without English (hand gestures are a must).

The Co Chien river separates Vinh Long from An Binh Island, but it’s easy to cross over on the ferry ($1 for the round trip). An Binh is a fun place to wander or ride bikes, with little paths and roads crossing over streams and canals. Watch out for traffic, though, as the paths are narrow and bikes and scooters are everywhere. If you’re interested in a “homestay,” An Binh is the best option, though folks that we spoke to said that it’s more of a B&B atmosphere rather than a true immersion opportunity.

We signed up for a tour of the Cai Be floating market, which included a visit to a crafts village and lunch on An Binh. The 45 minute boat ride to the market was pleasant, with our tour guide, Wei, giving us history of the towns, explanations of the various boats and other tidbits. The market was, well, not what I expected. I had visions of lots of small boats with shoppers rowing from boat to boat, squeezing mangos and inspecting fabric.

Cai Be floating market is more along the lines of a Costco of floating markets. Each boat specializes in a certain type to produce; a sample of the pumpkin, sweet potato or watermelon is tied to a pole and displayed on the stern of the boat. Customers, mostly vendors who sell in the daily local market won land, buy in bulk from these boats before heading back to their town. While it was not exactly what I had in mind, it was very interesting to see the boats that these families lived on, complete with pet dog and the requisite rooster.

After the market, I wasn’t expecting much from the craft village, but it was entertaining. We were able to see how popped rice candy is made (a more unique method than I’ve ever seen, involving stirring the rice in a hot wok with sand) as well as rice paper, which was fascinating. It definitely gives me a greater appreciation for the work when I crunch into a spring roll. Lunch was at a homestay on An Binh, the highlight of which was the elephant ear fish that was fried whole and displayed upright for great ease of picking the bones clean. I might have to try this at home with flounder.

My favorite part of Vinh Long, though, was the fact that we were able to stay there long enough for me to recognize people, and vice versa. I had my bread lady at the market who sold me fresh baguettes in the morning and the lady at the corner who cleaned and cut fresh pineapple–we must have each eaten a pineapple a day. We even started recognizing the most popular karaoke songs that were performed each night, the music audible and clear. 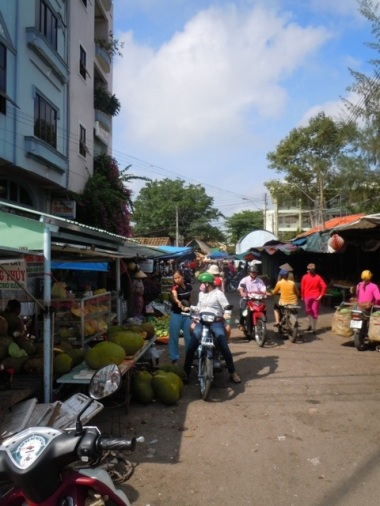 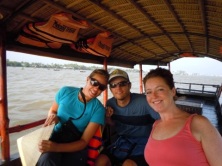 Our tour of the Mekong Delta

The merchants at the floating market live on the water full time; everything is onboard! 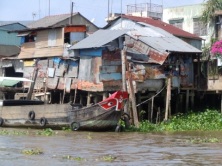 A transaction at the Cai Be Floating Market

Rice paper drying: the woven mats are the explanation for the patterns on the paper.