“Beer is proof that God loves us and wants us to be happy.” –erroneously attributed to Ben Franklin

“Beer Pairings are proof that God loves us a lot and wants us to eat good food while we drink.”—Katie Coakley 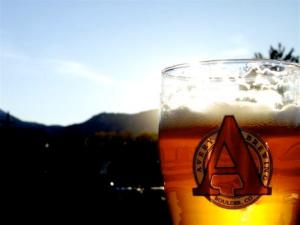 The sun sets on another perfect day in Vail. Photo totally stolen from the Vail Cascade website.

Food and wine pairings have been around for ages, inviting guests to sip and sample, reveling in complementary tastes and exotic vintages. Beer pairings, on the other hand, have only recently gained a foothold in the culinary scene in America.

The rise of the micro- and craft beer scene has elevated beer beyond the traditional lagers such as Budweiser, Coors and Michelob and introduced palates to hoppy IPAs, spicy Belgian styles and robust stouts. Consequently, chefs have taken the challenge of pairing beer, much like wine, with their cuisine—a task that is more challenging (and often more creative) than the traditional wine pairing.

The fun factor in these pairings is evident—I can just imagine Bemis going back into the kitchen with a sampling from Avery and saying, “okay, guys: go nuts.” Not only were the plates pleasant with the beer, but the tongue-in-cheek names of the dishes reflected the creativity in the kitchen. 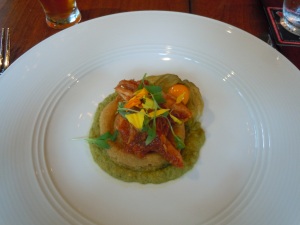 Tasting notes: The tangy, hoppy-verging-on-bitter Imperial IPA provided a good counterbalance for the Indian-reminiscent spiced pulled chicken. The corn pancake was sitting on a tasty, cooling green salsa that didn’t aggravate the palate, which can happen with spicy food and IPAs.

I could have eaten a whole plate of nothing but the chicken. It was that good. Dustin, one of the Avery guys, declared that he could have made out of with the chicken. 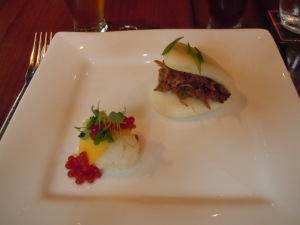 Translation: A dual pairing, the Belgian style, high octane Reverend and lighter, fruity Salvation “big beers” were paired with fruit sushi and a pork bun such as you would find in SE Asia.

Tasting notes: This was, in my opinion, the least successful pairing—a disappointment as The Revered is my favorite Colorado beer. The sushi rice was had a cloying mouth feel, even with the mango and bits of strawberry nearby. I saw what they were doing with the fruit notes, but it wasn’t enough. The pork buns were dry and, again, I didn’t have enough of a flavor to see any sort of relationship with The Reverend. 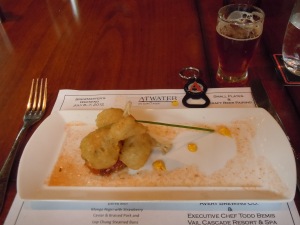 Translation: A barleywine-style ale, Hog Heaven is the original signature beer from Avery and was paired with thickly battered and fried frog’s legs, mayo and a traditional Italian “prostitute” sauce.

Tasting notes: This pairing relied mostly on the play on words, rather than a deliberate flavor pairing. However, that being said, the frog leg beignets were great: the frog meat succulent if not a little lost in the thick beignet coating. Insert some of the Puttanesca sauce into a beignet, though, and the marriage was heaven. 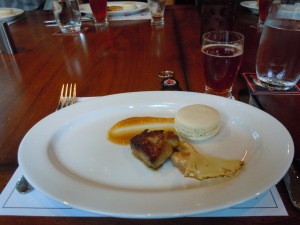 Translation: An oak-aged ale with lots of caramel and vanilla flavor paired with a hunk of fatty duck liver, seared piece of banana, grilled pineapple slice and some sort of sweet meringue/pastry type of thing.

Tasting notes: There’s something deliciously decadent about eating a piece of foie gras for dessert, internally pitying all the poor Californians who can no longer get the stuff. The rich, sweet desserty taste of the Samael paired well with the savory liver, the caramelized banana piece bringing back the sweetness. I could have used a few more pieces of banana and eschewed the pastry thing that came with the dessert—it was overpoweringly sweet and, with the beer, was just too much.

Perhaps it was the high-alcohol content of the demon-ale, but there was definitely talk of putting the moves on this dessert.

Craft Beer, Creative Cuisine takes place once a month with a different brewery each month. For $20, it’s one of the best values in the Valley, though I must admit that my enjoyment of the evening was directly proportional to the great guys from Avery (Shag, Truck and Dusty Bottoms) who regaled us with tales and answered all of my odd questions.