When I was little and living in Italy, we were introduced to Befana, the Italian Christmas Witch. Riding a broomstick with her black shawl thrown over her shoulders, Befana rides through the night on Epiphany Eve (January 5), sliding down chimneys to deliver candy to the socks of all of the good little boys and girls and coal to the naughty ones.

“Sure,” I thought. “We have Santa Claus, the Italians have Befana.” Chimneys, flying through the air, presents in stockings. Made sense to me.

Returning to the States, I forgot about Befana after a few years and slid comfortably back into the stories of Santa and his reindeer.

However, after visiting Iceland, I brought home more than just a million pictures and woolen goods–I also brought home the Yule Lads.

The Yule Lads and three of the 13 lads who now live in my home.

In Iceland, they have not one but 13 Santas, known as the Yule Lads. Of course, they didn’t start out that way, but apparently scaring the crap out of children to make them behave fell out of favor (Elf on the Shelf people, take note. Someday you and your Big Brother antics may suffer a simliar fate). In fact, a public decree was issued in 1746 telling parents that they couldn’t use of stories about Gryla, the lads’ ogress mother with an insatiable appetite for naughty children, and the Yuletide Lads to terrify their children into behaving.

Let’s not even get into Gryla’s “Christmas Cat,” another child abuser and abductor. This huge black cat goes after the kids that didn’t receive new clothes for the holidays.

In the 1800s, the Lads started improving their image, evolving from child snatchers to thieving tricksters who descend from the mountains one by one during the 13 days before Christmas. The first lad arrives on Dec. 12 (Stekkjastaur, the sheep worrier) and each lad stays for two weeks; the last Lad (Kertasníkir, the candle stealer) departs on January 6.

I was only able to fit three lads into my suitcase, but they’re already providing a lot of entertainment this holiday. I can’t wait until my niece is a little bit older and I can add stories of the Yule Lads to her Christmas memories.

Here is a rundown on all 13 Yule Lads:

Stekkjastaur, Sheep-Cote Clod: Harasses the sheep, tangling up their wool and making a general nuisance of himself trying to suckle the ewes for fresh milk.

Giljagaur, Gully Gawk: Hides in gullies, waiting for an opportunity to sneak into the cowshed and slurps the foam off of the milk.

Þvörusleikir, Spoon-Licker: Steals Þvörur (a type of a wooden spoon with a long handle) to lick. Is extremely thin due to malnutrition–there’s usually not much left on spoons and the rest of the cooking implements have been taken care of by his brothers. 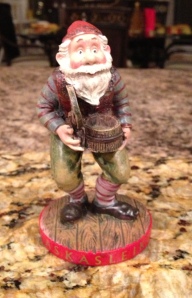 Askasleikir, Bowl-Licker: Hides under beds waiting for someone to put down their ‘askur’ (a type of bowl with a lid used instead of dishes), which he then steals.

Hurðaskellir, Door-Slammer: Likes to slam doors, especially during the night.

Skyrgámur, Skyr-Gobbler: Has an affinity for skyr, the yogurt like staple in Icelandic cuisine.

Bjúgnakrækir, Sausage-Swiper: Hides in the rafters and snatches sausages that are being smoked.

Gluggagægir, Window-Peeper: A voyeur who peeps through windows in search of things to steal.

Gáttaþefur, Doorway-Sniffer: Has an abnormally large nose and an acute sense of smell which he uses to locate laufabrauð, “leaf bread.”

Ketkrókur, Meat-Hook: Uses a hook to steal meat that’s smoking in the chimney. Not to be confused with Sausage-Swiper.

Kertasníkir, Candle-Beggar: Follows children in order to steal their candles as they were precious provided the most light available on a dark night.

2 thoughts on “Bringing the Yule Lads Home for Christmas”